The warnings are eerily similar to those Chrome displays natively through the Safe Browsing API, but are powered by Microsoft’s malicious link database, also known as the SmartScreen API.

Chrome users should be really happy that they can now use both APIs to detect phishing and malware hosting URLs. The SmartScreen API is not as well-known as Google’s more famous Safe Browsing API, but works the same, if not better.

a Benchmark NSS Labs revealed that Edge (with its SmartScreen API) detected 99% of all phishing URLs thrown at it in a test last year, while Chrome only detected 87% of malicious links to which users have accessed. 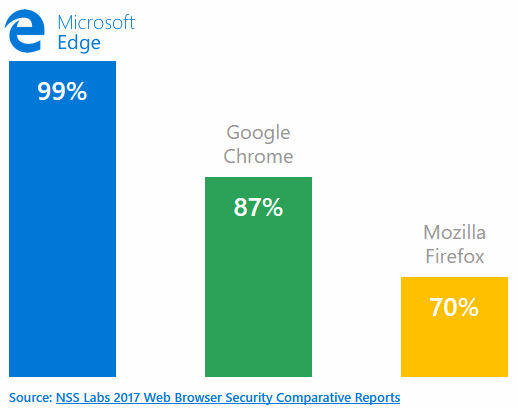 Microsoft made a mistake by releasing Edge in an unfinished state in 2015, but the browser has quietly morphed into a solid product, especially when it comes to security features.

The SmartScreen API is a trustworthy technology, and the benefits of Edge anti-exploit protection due to its tight integration with Windows 10 make it a difficult problem to solve when it comes to web attacks.

It’s unclear why Microsoft chose to port SmartScreen to Google Chrome, but we’re glad they did.

Why anti-phishing training is not enough